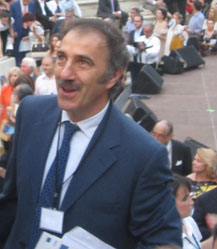 Born in Madrid in 1957, Pedro Ponce de León studied Architecture at the Escuela Técnica Superior de Arquitectura de Madrid, reaching the degree of Architect in 1979 and Doctorate (with Cum Laude honours) in 2013. Between 1980 and 1982 he worked as an architect of the Spanish Archeological Mission in Jordan. In 1984 he received a scholarship from the Foundation Juan March in order to study Architectural Restoration in the International Center for the Study of the Preservation and Restoration of Cultural Property (ICCROM) at the Spanish Academy in Rome. His study about its cloisters was published in 1986 in the journal of the San Fernando Royal Academy of Fine Arts.

His profesional career is focus on the intervention in the historical and environmental heritage, in the field of preservation as well as in functional revitalization, on residential architecture, both existing (rehabilitation) and from scratch. He is the autor of more than thirty projects of restoration of buildings and monumental building complexes. In Spain we can stand out his work in:

He has worked, apart from Spain, in countries such as Jordan, Cuba, Mali, Albania, Romania, Bulgaria, Georgia, and countries from former Yugoslavia, and he has developed the following projects: the Umayyad palace of Amman (Jordan), the Church of Santa María del Rosario (Cuba), the building for the CFO in Bamako (Mali) and the Amphitheater of Dürres (Albania).

He is a consultant architect for the Division of Cultural and Natural Heritage (Council of Europe), consultant for different agencies such as AECI (Spanish Agency for International Cooperation) or CEB, and Corresponding Academic of the Royal Academy of History and the Spanish-Belgium Academy.